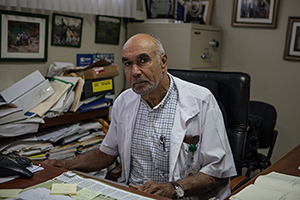 The Friends of Modern Architecture/Lincoln is pleased to present, Design That Heals, a
23-minute film featuring Dr. Pape, who has dedicated his life to fighting infectious diseases in Haiti. When the 2010 devasting earthquake killed over 200,000 people in Haiti and experienced the largest cholera outbreak in modern history ten months later, he sought help from MASS Design Group “to create a structure that could be adapted to the needs of the people, that would have some kind of dignity, that is fully Haitian.” The Boston-based non-profit design firm responded to these unprecedented needs in a timely manner, employing local businesses and artisans to build an enlightened structure that was smart, adaptable, and brought a level of respect to health care workers and their patients and families.

We are honored to have Dr. Jean William Pape join us from Haiti after the Zoom presentation to answer questions.

Dr. Jean Bill Pape is an internationally recognized leader in the fight against HIV, serving on many prestigious committees that develop global HIV guidelines, and giving keynote addresses at many of the world’s most important scientific HIV conferences.  He was awarded the legion d’honneur by France in 2002 and was elected as a member of the USA National Academy of Medicine in 2003. He is also the recipient of the following awards: Carlos Slim Health Research, Institut de France’s Prix Christophe Mérieux, 2008 Gates Global Health, and a Clinton Global Citizen Award. In 2013, he received the WHO Stop TB Partnership Kochon Award and in 2014, Haiti’s highest honors, ‘Honneur et Mérite, Grade Commandeur’. In 2018 he was the first recipient of the new Joan and Sandy Weill Cornell Exemplary Faculty Award.

He was recently appointed to The WHO Science Council. The nine members represent a broad range of disciplines. The General Council of the World Health Organization Members are selected and appointed as acknowledged experts from around the world in the fields of basic science, translational and clinical research, social sciences, epidemiology and public health.

Our host is Scott Morgan, Executive Director of the Haitian Global Health Alliance in Support of GHESKIO, If you wish to donate to Dr. Pape's work and double the donation in the month of April please click the following link:

MASS Design Group
Our mission is to research, build, and advocate for architecture that promotes justice and human dignity.
We are a team of over 140+ architects, landscape architects, engineers, builders, furniture designers, writers, filmmakers, and researchers representing 20 countries across the globe. We believe in expanding access to design that is purposeful, healing, and hopeful.
How We Work
We believe that every project has a mission and accompany our partners throughout the design process — from early visioning through project completion — to develop and implement a shared vision for how design can achieve that mission. We do this through architecture, landscape design, engineering, planning, research, film, and community engagement.
Helping build a climate positive future is imperative. Our projects move beyond just issues of energy use and efficiency, to holistically design the project ecosystem, including an entire supply chain that is sustainable, resilient, and regenerative. One Health design is a strategy that produces diverse, healthy, and productive habitats for human, animal, and ecological growth.

A recording of the event is available here.