Before the Town Meeting vote of 2018, the Lincoln Historic District consisted of 73 properties located in four areas:

For more information please consult the website of Lincoln Historic District Commission which can be found here.

Modern houses within the District prior to the 2018 Initiative

Seven Modern houses were originally included in the Lincoln Historic District including seminal properties in the Woods End Road neighborhood designed by world-renowned Modern architects Walter Gropius and Marcel Breuer and colleague Walter Bogner. Two others are within the Lincoln Center district.

DESIGNED BY BAUHAUS FOUNDER AND PROFESSOR OF HARVARD SCHOOL OF GRADUATE DESIGN, ARCHITECT WALTER GROPIUS FOR HIS FAMILY IN 1938 IS NATIONAL HISTORIC LANDMARK.

DESIGNED BY BAUHAUS STUDENT AND FACULTY MEMBER, HARVARD PROFESSOR, ARCHITECT, AND FURNITURE DESIGNER MARCEL BREUER FOR HIMSELF in 1939 AND TO DEMONSTRATE TO STUDENTS AND THE PUBLIC HOW EUROPEAN MODERN ARCHITECTURAL LANGUAGE COULD BE ADAPTED TO NEW ENGLAND VERNACULAR.

THE 1939 BOGNER HOUSE WAS DESIGNED BY HARVARD PROFESSOR AND ARCHITECT WALTER BOGNER FOR HIS FAMILY AND TO DEMONSTRATE THE ECONOMY AND EFFICIENCY OF MODERN ARCHITECTURE.

THE 1939 FORD HOUSE WAS DESIGNED BY WALTER GROPIUS AND MARCEL BREUER FOR HARVARD PROFESSOR, SOCIOLOGIST, AND HOUSING SPECIALIST JAMES FORD AND HIS SPOUSE, HOUSING AND ARCHITECTURE SPECIALIST KATHERINE MORROW FORD. 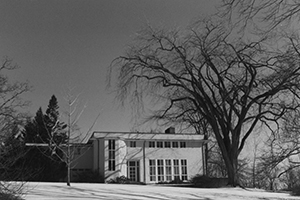 THE 1948 HECK HOUSE WAS A REDESIGN OF A VICTORIAN ERA HOUSE BY HENRY HOOVER FOR THE STANLEY HECK FAMILY. 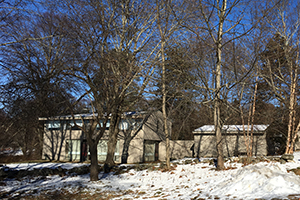 THE 1958 FIRST PARISH LINCOLN PARSONAGE WAS DESIGNED BY HENRY HOOVER. 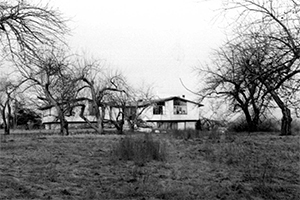 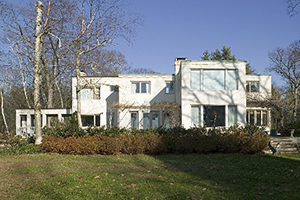 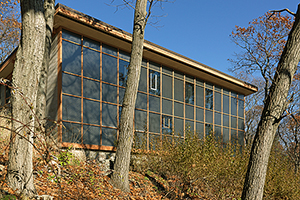 CONTINUE HERE TO VIEW IMAGES OF THE HOUSES >>